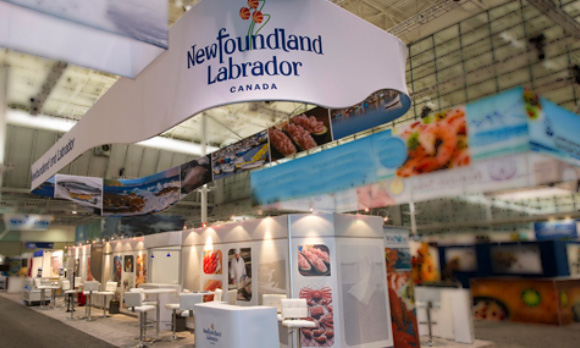 A provincial trade delegation is taking part in the Seafood Expo North America  Mar. 16 – 18. This trade show is of great significance to the industry, as the United States continues to be the top market for Newfoundland and Labrador’s seafood products, having accounted for 39.9 per cent of the value of the province’s total fish exports in 2013.

The province’s Minister of Fisheries and Aquaculture, Keith Hutchings, is part of the delegation. In a relerase prior to the mission, he is quoted as saying “Newfoundland and Labrador companies have gained a strong reputation as engaging and exciting participants at this important international tradeshow.” He said, “the provincial government has played a key role in supporting that success.” according to Minister Hutchings  department staff annually organize a 111.5 square metre pavilion; arrange a much anticipated networking reception for key delegates; and, provide general support to provincial firms throughout the expo. “I look forward to further advancing the province’s reputation as a leading supplier of fine seafood to global markets, and to meeting with industry players in the coming days,” says the quotes from the  minister

Seafood Expo North America is one of the largest seafood trade events in the world, with over 19,000 buyers and suppliers from more than 100 countries participating. Each year, the provincial delegation hosts a special reception just prior to the expo to promote the fishing industry and facilitate networking between seafood companies and buyers. The 16th annual Newfoundland and Labrador Seafood Industry Reception will take place on Saturday, March 15, and will feature a wide variety of seafood products donated by Newfoundland and Labrador seafood companies. Some feature dishes will also be prepared by Newfoundland and Labrador chefs Roary MacPherson and Angie Ryan.

The Havana International Fair (FIHAV) is the largest annual multi-sector trade fair in Cuba. Last year, it welcomed over 1000 companies from 70 countries and 58 …

As may know the Canadian Free Trade Agreement (CFTA) came into force on July 1, 2017.  This agreement covers trade, investment and labour mobility across Canada.  …

Springboard Atlantic’s board of directors announced today, November 16, the appointment of Daryl Genge as the organization’s new president and chief executive officer. Mr. Genge has …